Bemused by the equipment, the stagecraft and the risk of permanent nerve damage, I wonder if it would just be simpler for them to have sex. But that’s missing the point.

I’ve been asked if the performers have sex as part of the show. Oh, spare us. They’re here for knots. Such as the Somerville Bowline, derived from a knot called ABOK 1445, aka the Myrtle Hitch. It’s named after a place in Massachusetts, not my old Oxford college. I’m wondering if this is the opposite of sex.

The rope is less than 1cm thick. Silk for La Perla moments. Hemp rope is pale and soft - think of macramé hammocks for hanging baskets. If oiled, it’s tacky, smells farmyardy and leaves a grease mark on fabric. Coloured rope is for mood-signalling or matching the curtains. Harsh jute rope doubles as sash-cords. A rigger shows me his hands red-raw from smoothing out the kinks in new rope: this reminds me of the Victorian prison punishment of picking oakum.

During the set-up you hear the click of carabiners. A lot of climbers are drawn to this caper. Dr Phil, a burly French top, is an electrical engineer: he tells me it’s all about working with cabling.


The top re-fashions the puppet this way and that. The pace is fast. But despite the apparent helplessness of the bound captive, who’s really in charge? Ask Gorgone, a French pioneer of both tying and being tied. It’s a paradox, she says. As a top, the experience is about humility. As a bottom, it’s about power.

And it goes beyond flesh or seediness. She says her bondage work is ‘born from the desire to break free from the sexual and S&M connotation that it carries. My mission is to convey the unique experience and aesthetic of the body in ropes to a broader and more mainstream audience.’

Gorgone performs and teaches around the world. No western woman has won more esteem from the Japanese keeper of the flame Akira Naka. ‘When he ties me,’ says Gorgone, ‘I feel like a river under the rain. Powerful, fluid and peaceful but very melancholic.’


Gorgone is a no-carb vegan vaper without any apparent room to store her internal organs. She can shape her spine like a U-bend. Naked, she is invulnerable, and turns up the voltage for an audience.

‘Ropes are my oxygen,’ says Gorgone. She feels like the golem, the formless creature of clay moulded when the Hebrew word emet (truth) is written on her forehead. The rigger creates the model. Rope shapes the shapeless. 'I was nothing and your eyes saw me,' she says.

Thine eyes did see my substance, yet being unperfect; and in thy book all my members were written, which in continuance were fashioned, when as yet there was none of them. – Psalm 139, verse 16

And how do you cope with the pain of being hoicked up in rope? ‘Eroticise it,’ says Gorgone, with a headmistressy stare through her vapour veil.

‘Eroticism is irrational; explicable but irrational.’ That’s Jean-Claude Juncker, president of the European Commission, quoted in the Financial Times, in an aside about eroticism and power.


The shibari cliché remains bloke-ties-fit-bird but there is an increasing amount of woman-ties-woman. I like older-man-ties-older-woman for the mellow emotional currents, like the switching moods in the ember days of Shakespeare’s Antony and Cleopatra. Woman-ties-man and man-ties-man are too rare.

Then there are solo diversions – people self-tying in rope, or realising variations on Leonardo’s Vitruvian Man in a metal hoop. Ayumi LaNoire, whose portfolio includes shibari and fire-eating, is a star performer on a golden pole – as geisha, Hello Kitty schoolgirl, tragic blindfolded vamp. She can support herself horizontally on the pole. After her performance, the brawny guys have a go. They can’t do it.


At the beginning of tonight’s show, Nina Russ, an empress of rope, calls me over. Eyes bright, she starts to tell me about her day: 'I felt a wave of pleasure all over my body. And adrenaline.'

Steady on, girl. But she’s talking about gardening as usual. ‘Rope bondage is like growing vegetables,’ she says. ‘When you start to tie someone, you don't know what you'll end up with.’

‘Suspended in rope,’ writes Gorgone, ‘my body forgets the ground. It falls, but doesn’t fear any impact. In this space between high and low, gravity turns into benediction; the fall is veiled in immortality.’

And that’s eroticism. Anything veiled. 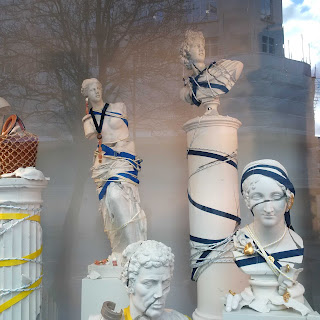 They're at it again. This is the second time I've seen entry-level Japanese rope bondage rigging in Selfridges' window display. 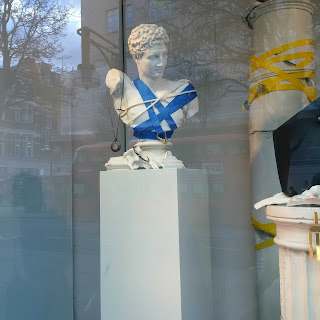 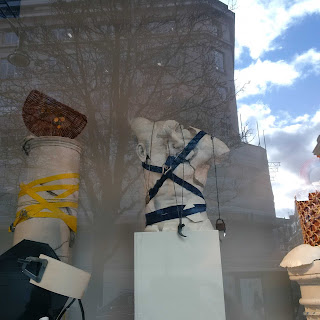 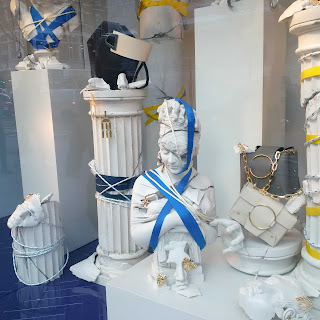 Posted by Isobel Williams at 12:42 No comments: